UPDATE! We are pleased to announce that the Main Venue shall be at

We are honoured to announce that the Ministry of Education of Malaysia is fully supporting this festival!

They shall be awarding co-curriculum points towards the participation of SPAF-Drama.  [LINK]

SPAF aims to inspire, so all performers leave with a sense of achievement! Its purpose is to open up the window of performing arts to students, encouraging them to develop a range of communication and interpersonal skills through an interactive environment. 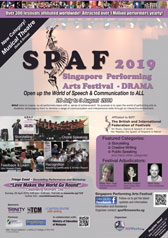 - Download the Booklet above.
- Select your Class(es) (Categories) and note the class number(s).
- Fill in the Entry Form (End of Booklet)
- Need assistance? email us at This email address is being protected from spambots. You need JavaScript enabled to view it.

The 8th Singapore Performing Arts Festival (SPAF) will be held from 26th July to 3rd August 2018. Since the Ministry of Education and government have embraced the significance of drama as part of the education process in Singapore, there has been an increasing demand for drama activities amongst schools, parents and students. This event is specially tailored to the Primary and Secondary school students in Singapore.

Preparing for and participation in a Festival involves young people in group activity and individual achievement - every skill gained in preparing for and giving a performance is a valuable life skill which will be used in job interviews, in the workplace, in leisure activities and in social and interpersonal relationships throughout life.

Most will not make their career in the Arts but will become that educated audience who will keep the arts alive in the coming years. However, the festival movement was where many famous names began their career, Julian Lloyd Webber, Maureen Lipman, Wayne Sleep, Dame Janet Baker, & Paul Scofield to name a few!

The adjudicator will be a practising professional who will not only make a skilled judgement but who will also seek to inspire a greater appreciation of the work being performed and remarks made in public and on the written report will evaluate and encourage the performers.

Full details of categories within syllabus info booklet.  Email us at This email address is being protected from spambots. You need JavaScript enabled to view it. if you need further clarifications or assistance.

-          Just about ANYONE! who is interested in improving critical life skills such as:

b.  Confidence in a presentation before an audience

-          EVERYONE! This is the perfect festival to experience Speech & Drama whether you have little or no previous experience.

What will each participant get?

How will the festival be conducted?

-          Individual and Group Participants will be allocated classes based on their age.

-          Each Class will last about an hour depending on the age group and class type/size.

a.  Participants will take turns to perform in the order predetermined by the organiser.

b.  The adjudicator will evaluate their performance on a report form, which will be presented to the respective participants at the end of each class.

c.  After all the participants have presented their work, the adjudicator will conduct a mini master-class style to comment on the overall performance of the class as a whole.

d.  Certificates will be presented to all participants.

A:     YES! Although we are a professional organization our aim is to attract Newcomers. festival participants, teachers and parents with little or no experience will still be able to participate in, and benefit from, involvement in SPAF!

Q:       Is SPAF’s concept something new and not tested before?

A:      On the contrary, SPAF is associated to The British & International Federation of Festivals, with over 300 associated festivals worldwide and attracted over ONE Million performers reaching an audience of around 5 million in 2010.

Q:       We already have many activities for Performing Arts, why should we consider SPAF?

A:      One of SPAF’s main benefits is the written and verbal educational feedback provided by the adjudicator. Performers will not only have a chance to perform but will able to improve themselves through the adjudicator’s feedback and master class.

SPAF wants YOU! - Be a Volunteer and help out at SPAF events!

Be a Friend of SPAF!

Contact us at This email address is being protected from spambots. You need JavaScript enabled to view it.

Hi! we will try to reply as soon as possilble.  Alternatively you may email us at info@msworks.sg.  Cheers!